South America Weather Forecast: In Brazil, conditions are still expected to be favorable for crop development in most of the nation. In Argentina, a beneficial rain event is still expected to impact central and southern production areas of the nation Friday. The GFS model has reduced the intensity of the associated weather disturbance some. There will be some pockets that miss out from much rain in this event though. A period of dryness after the rain event will then lead to some increase of crop stress in the driest areas.

U.S. soybean processors notched their third largest monthly crush on record in November, while soymeal exports surged to the highest for any month in nearly eight years, according to data released by the National Oilseed Processors Association (NOPA)

It was the largest November crush on record, eclipsing the previous mark of 166.959 million bushels set in November 2018. It was also the third largest monthly crush ever, behind only October 2020 and March 2020.

Argentine oilseed workers continued their wage strike on Tuesday after the failure of recent contract negotiations, two unions representing soymeal factory workers and the CIARA chamber of manufacturers said. The country’s key agro-export sector has been bogged down by work stoppages by employees of companies that manufacture soy-based livestock feed

European wheat futures edged higher on Tuesday, steadying after a slide in the previous session as Russia’s less competitive prices in an Egyptian tender kept the focus on an export tax introduced by Moscow. March milling wheat settled 1 euro, or 0.5%, higher at 207.25 euros ($251.77) a tonne. 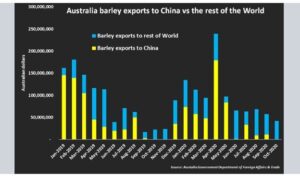 Australia will launch a formal appeal to the World Trade Organization (WTO) later on Wednesday seeking a review of China’s decision to impose hefty tariffs on imports of Australian barley. Acknowledging the appeal may take years to be resolved, Birmingham told reporters that Australia had little choice after Beijing in May imposed five years of anti-dumping and anti-subsidy duties totaling 80.5% on Canberra’s barley – effectively stopping a billion-dollar trade in its tracks.