A highly favorable mix of rain and sunshine will occur in Brazil agricultural areas during the coming two weeks. Sufficient drying time will occur between rain events to support soybean harvesting and Safrinha crop planting. Temperatures will be seasonable during both forecast weeks

The USDA is scheduled to release its monthly fats and oils report at 2 p.m. CST.

Speculators’ bullishness in Chicago corn paused a couple weeks ago with futures trading at more than seven-year highs, but an incredible run of U.S. corn sales to China last week may have refreshed investor optimism. The week ended Jan. 26 was very volatile for CBOT corn futures and included a historic plunge in prices followed by a strong rebound, and the most-active contract finished the period up 1.2%. 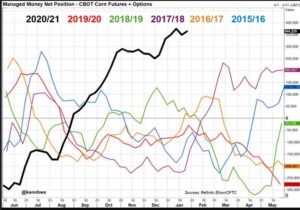 Global demand for meat and animal feeds, such as corn and soybeans, will rise over the next few years despite the ongoing economic uncertainty, says Capital Economics; “In contrast to previous recessions, we anticipate that demand for meat will hold up relatively well over the next few years, which in turn will boost the consumption of animal feeds.” Furthermore, it expects demand for meat to rise in Asia as the recovery in China’s hog herd will make pork much cheaper. However it does add that the outbreak of avian flu in India poses a downside risk to its upbeat outlook for animal feed demand since it could lead to a sharp reduction in the poultry population.

Exports empty Canada’s canola bins, driving prices to near records. Canada is running short of the oilseed six months before the next harvest, with strong export demand driving prices to nearly 13-year highs last week. Supplies of major commodity crops are dwindling worldwide as buyers hoard food supplies during the COVID-19 pandemic. China is loading up on grains and oilseeds that it can feed to animals, raising food inflation and causing some nations to restrict exports of their crops.

China sold 2,187,297 tonnes of wheat, or 54.34% of total offered, during auction of state reserves last week, the National Grain Trade Center said; The volume of sale, done at an average price at 2,373 yuan ($367.46) per tonne, fell from record high levels from the previous week, when feed producers ramped up purchases of wheat to replace corn amid soaring prices of the latter.

China booked its biggest purchase of U.S. corn yet, the U.S. Agriculture Department said on Friday, buying more at once than any country except the Soviet Union 30 years ago, as it tries to meet a surge in demand for animal feed. The purchase, and a string of deals earlier this week, mean China is on course to become the world’s largest corn importer. ts buying spree has driven up global prices of corn and other grains and may stoke food inflation in economies already reeling from the COVID-19 pandemic.

Brazil’s 2020/2021 soybean output forecast was risen to 133.1 million tonnes, agribusiness consultancy Safras & Mercado said on Friday, as the outlook for the crop improved after a drought disrupted plantings last year. Previously, Safras & Mercado has forecast Brazil’s soybean crop at 132.5 million tonnes. The area grown with soy this season is estimated at 38.6 million hectares (95.38m acres), representing a 3.2% expansion from the previous cycle

Shipping schedules for Brazilian ports show soybean exports of some 8.5 million tonnes in February, a potential record for the month, but getting all that to port will be tough for trading firms grappling with harvesting delays and a potential trucker strike. Some associations representing independent truckers and logistics workers have called for a strike to protest higher diesel prices, starting on Monday, which could hamper soy deliveries to key ports like Santos and Paranaguá.

Russia is considering a formula-based tax on the wheat it sends abroad from June 1, a month earlier than previously stated, two sources familiar with government talks told Reuters on Saturday. oscow is attempting to reduce wheat exports to help curb rising domestic food prices after President Vladimir Putin criticised food inflation amid the coronavirus pandemic. It has already said it would impose fixed tariffs – set at 25 euros ($30) per tonne for Feb. 15 to 28, rising to 50 euros per tonne from March 1 to June 30 – on wheat exports, but this was just a short-term measure and it has said it planned to switch to a more complicated formula-based regime on July 1.

Agriculture consultancy Sovecon has raised its forecast for Russia’s 2020/21 wheat exports by 1.6 million tonnes to 37.9 million tonnes citing current high export levels. Russia is attempting to curb rising food prices during the COVID-19 pandemic. It imposed a wheat export tax with fixed tariff until the end of June and plans to switch to a formula-based tax in the new marketing season starting on July 1. These plans are likely to keep Russia’s wheat exports active until July. “This is likely to increase supply in the current season as farmers will lose the incentive to store wheat until the new season. It expects Russia’s January wheat exports to reach 3.3 million tonnes, up 57% year on year.

Russia’s January exports of wheat, barley and maize (corn) are estimated at 3.7 million tonnes, down from 5.4 million tonnes in December, the SovEcon agriculture consultancy said.

Euronext wheat futures fell on Friday, ceding some of its gains after a volatile week marked by huge Chinese demand for U.S. corn. A lack of fresh impetus in the wheat market, with traders waiting to see when top importer Egypt returns to the market, also encouraged Euronext to consolidate at the end of a month marked by multi-year highs across grains. March milling wheat was down 2.75 euros, or 1.2%, at 227.00 euros ($275.51) a tonne.

Strategie Grains has increased its forecast for rapeseed imports into the European Union and Britain in the current 2020/21 season by 800,000 tonnes to a record 6.7 million tonnes, the consultancy said in an oilseed report. he sharp upward revision from its previous outlook in early December reflected attractive crushing margins that were fuelling demand in Europe, and also a bumper Australian harvest that was offering short-term availability, Strategie Grains said. Vegetable oil prices have rallied in recent weeks due to supply concerns and brisk demand from countries like China, making it more profitable to process oilseeds.

India is likely to increase allocations toward its annual food subsidy spending by 4%-6% in the budget for the fiscal year beginning April 1 to cover the cost of running the world’s biggest food welfare programme, said two government sources. For the 2021/22 fiscal year, India’s total outlay toward the food subsidy is expected to cross 2.1 trillion rupees ($28.7 billion), but the budgeted allocation is likely to go up by only 4%-6% from 1.16 trillion rupees earmarked in the previous year, said the sources with direct knowledge of budget discussions, who asked not to be named as the talks are private. The allocation for food subsidy is likely to go up to 1.22 trillion to 1.24 trillion rupees mainly due to fiscal constraints,