Dry weather and storm damage across the U.S. Midwest coupled with strong U.S. export demand sparked speculators’ biggest buying week in Chicago-traded grains and oilseeds in over a year, and soybeans led the charge when combining their moves in CBOT corn, wheat, soybeans and products, and Kansas City and Minneapolis wheat through Aug. 18, investors bought 201,537 futures and options contracts on the net, the most for a week since June 4, 2019.

The 6 to 10 day forecast for the Midwest has both models indicating fairly healthy rains to fall in all of the region; both see totals of at least .75-1.25” to fall, with some 1.25”+ totals also possible, especially in the west; temps will run above average in most of the region for the week ahead as well as into the weekend and then will fall to below average as we work through the first half of next week.

The 6-10 day forecast for the Southern Plains sees rains to fall in the western sections of Kansas, Oklahoma, and most of Texas with light to moderate rains in the rest of Kansas and Oklahoma; temps will run above average in most areas in the next week to ten days.

The 6-10 day forecast for the Delta sees light to moderate rains to fall in most of the region.

Pro Farmer doused hopes for a record U.S. corn crop on Friday, after a severe wind storm and drought cut yield potential in the top production state of Iowa. 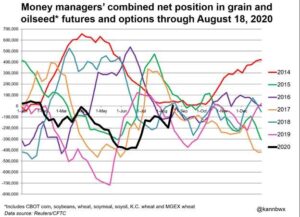 U.S. President Donald Trump raised the possibility of decoupling the U.S. economy from China, a major purchaser of U.S. goods; Trump initially said “we don’t have to” do business with China, and then later said about decoupling: “Well it’s something that if they don’t treat us right I would certainly, I would certainly do that.”

China’s July pork imports more than doubled to 430,000 tons from a year earlier and hit a record monthly volume, customs data showed, despite tough new checks on cargoes that had slowed clearing at ports; Chinese importers have been bringing in huge volumes of meat this year to fill a large domestic supply shortage after an epidemic of African swine fever killed millions of pigs; however the data, released late on Sunday, came as a surprise after many overseas processing plants were forced to halt or slow production in the prior months due to coronavirus infections among workers.

China has found destructive fall armyworm in Liaoning province in its northeastern Cornbelt for the first time, state media reported; the destructive pest, which first arrived in China in January 2019, is moving north across the country at a much faster pace lately, due to the impact of Typhoon Hagupit; the report comes as China moves to guarantee food security as various disruptions like flooding, drought and a global coronavirus pandemic, threatened to disrupt its grains supplies.

Russia’s August exports of wheat, barley and maize (corn) are estimated at 5.5 million tons, up from 3.0 million tons estimated in July, the SovEcon agriculture consultancy said.

Ukraine has this year harvested 38.04 million tons of grain from 9.6 million hectares or 62% of the sown area as of Aug. 20, the economy ministry said

Benchmark wheat futures on Euronext rose on Friday to their highest in more than three weeks as harsh weather in Argentina threw the focus on to global supply risks and a retreat in the value of the euro made European wheat more competitive overseas; December milling wheat settled up 2.75 euros, or 1.4%, at 183.75 euros ($216.15) a ton, after earlier touching its highest since July 28 at 184.00 euros; front-month September settled 5 euros, or 2.8%, higher at 186.25 euros after earlier hitting a five-week peak of 186.75 euros.

India’s soybean production could jump by 32% in 2020 to 12.25 million tons from a year earlier due to higher area under the oilseed and as the yields are expected to rise on ample monsoon rainfall, a leading trade body said; increased production of India’s main summer-sown oilseed could help the world’s biggest vegetable oil importer trim costly purchases of palm oil, soyoil and sunflower oil from Indonesia, Malaysia, Argentina and Ukraine.

Egypt’s wheat imports are expected to fall marginally to 13 million tons in marketing year 2020/2021 from 13.3 million a year earlier and 12.35 million in 2018/2019, according to a recent report by the US Department of Agriculture.