Overnight trade has SRW Wheat up roughly 2 cents, HRW up 3; HRS Wheat up 1, Corn is up 1 cent; Soybeans up 5;  Soymeal unchanged, and Soyoil up 45 points.

Malaysian palm oil prices were up 82 ringgit at 2,893 (basis November) tracking rival veg oils and concern over a slower than expected rise in output.

U.S. Weather Forecast: The 6 to 10 day forecast for the Midwest see mostly dry weather to continue through the weekend. A front sees bring light to moderate rains to MN, IA, and WI by around Tuesday of next week. Little to no rains are seen for the rest of region. Temps are seen running below average in most of the region.  The 11 to 16 day outlook for the Midwest has below average rainfall and average to above average temps. The Southern Plains has little to no rainfall for most of the region over the next 6 to 10 days with some light rains possible for KS by Tuesday of next week. Temps will be below average this week warming to above average by the end of the 6 to 10 day period.  The Delta looks to be mainly dry over the 6 to 10 day period once remnants of Sally move through.

For the week ended September 3rd, U.S. All Wheat sales are running 8% ahead of a year ago, shipments up 6% with the USDA forecasting a 1% increase on the year

For the week ended September 3rd, U.S. Corn sales are running 162% ahead of a year ago, shipments 40% behind with the USDA forecasting a 32% increase.

For the week ended September 3rd, U.S. Soybean sales are running 216% ahead of a year ago, shipments 25% ahead with the USDA forecasting a 26% increase on the year.

President Donald Trump’s allies in Iowa launched a pressure campaign seeking his support for the ethanol industry in recent weeks, ultimately leading to his decision this week to gut a program granting waivers to oil refineries from biofuel requirements, according to two sources familiar with the events; the push, led by Iowa Senator Joni Ernst, came as Trump’s Democratic presidential rival Joe Biden was slamming Trump on the issue under the advice of rural Democrats who wanted the former vice president to capitalize on tightening polls in Iowa; the pressure that corn backers placed on both campaigns reflects the political importance of ethanol in the U.S. Farm Belt; that constituency helped elect Trump in 2016 but has become frustrated by the administration’s handling of the Renewable Fuel Standard requiring refiners to blend billions of gallons of the corn-based fuel into gasoline.

The Trump administration is considering financial aid for oil refiners denied waivers that exempt them from U.S. biofuel blending requirements; President Donald Trump has instructed his Environmental Protection Agency to deny dozens of requests from oil refiners for retroactive waivers; the financial relief would be a way for the administration to assuage refiners that say requirements to blend billions of gallons of biofuels into their fuel are too pricey.

Selected highlights from a report issued by a U.S. Department of Agriculture attache in Berlin:

On Sept. 10, Germany’s Federal Minister of Food and Agriculture confirmed an African swine fever (ASF) case in a wild boar found in Eastern Germany near the German-Polish border; the first ASF case in Germany jeopardizes $867 million in exports to China, which will likely result in increased pork exports from other major suppliers, including the United States. 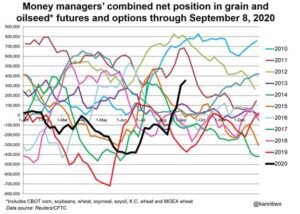 China’s agriculture ministry raised its forecasts for corn imports for both the 2019/20 and 2020/21 crop years, on large arrivals from the United States

It also lowered its outlook for corn output in the new crop year that starts in October and ends in September, 2021, after a typhoon hit some parts of the country’s northeastern cornbelt

China also lowered its forecast for edible oil output in 2020/21 to 27.65 million tons, on falling rapeseed imports and after rain affected quality and yields in some regions

Forecasts for soybeans output, imports, and consumption in 2020/21 year remain the same.

Australian wheat producers have been dragged into the growing political and trade tussle between Canberra and Beijing, after China warned it would put Australian exports under the microscope; in the latest sign of souring relations between the two countries, China’s General Administration of Customs has issued a notice in the past two weeks saying it will apply “enhanced inspection” efforts on shipments of Australian wheat.

China is so desperate to rebuild pig herds after swine fever that its banks are experimenting with loans to farmers backed by a novel asset: their hogs; the country’s swine herd fell steeply after African swine fever, which is harmless to humans but usually deadly for pigs, first emerged in August 2018. That pushed up prices for pork, a staple food in China; the government, worried about food-price inflation, has since encouraged farmers to restock and larger commercial farms to expand.

The prices of live pigs in China declined 1.3 percent in early September compared with the previous 10 days, data from the National Bureau of Statistics (NBS) showed; since last year, China has implemented a string of policies to stimulate hog production and stabilize pork prices affected by African swine fever and other factors.

Russia’s September exports of wheat, barley and maize (corn) are estimated at 5.65 million tons, up from 5.10 million tons in August, the SovEcon agriculture consultancy said.

Ukraine’s 2020 export prices for 12.5% protein milling wheat rose by $6-$7 per ton over the past week thanks to high demand from importers and worries over a delay in winter wheat sowing, APK-Inform agriculture consultancy said; Ukrainian wheat prices stood at $220-$224 per ton on a free-on-board Black Sea basis as of the end of last week; it said 11.5% protein wheat cost between $218 and $222 per ton FOB Black Sea.

Drought is disrupting rapeseed sowing in France for the third year in a row and could prevent a recovery in the crop area that has shrunk in recent years due to adverse weather, insect damage and declining interest from farmers; initial surveys of farmer sowing intentions suggested the rapeseed area would be stable compared with this year’s harvest at around 1-1.1 million hectares; however, contrasting conditions between very dry eastern zones and western regions that received more rainfall were making it hard to forecast the crop area; France’s rapeseed area has been 1.1 million hectares in each of the past two harvests, compared with around 1.5 million in 2015-2016.

British wheat imports were sharply above year earlier levels in July with Canada and France the main suppliers, customs data showed; wheat imports for the month totaled 149,337 tons, up from 91,965 tons in July 2019, the figures show.

German pork exports to China and some other non-European Union countries are temporarily not feasible and have stopped after a case of African swine fever (ASF) was confirmed in a wild boar, Germany’s agriculture ministry said; Germany’s pork exports to China are worth around 1 billion euros annually, but face disruption by the case of ASF in the state of Brandenburg, which is temporarily making essential declarations on export paperwork impossible.