The USDA on Friday released details of a second round of COVID-19 aid for farmers, which will pay up to $14 billion to growers of major crops such as corn, soybeans and wheat, as well as livestock, dairy and tobacco.

South America Weather Forecast: Showers and thunderstorms in parts of Brazil and Argentina in the next two weeks will help improve topsoil moisture – at least temporarily – for some early season spring planting.

Global supplies of soybeans are about to get even tighter, with the development of a La Nina climate pattern potentially leading to lower production; that would provide a boost for the commodity, which has already seen significant growth in demand from China and prices rising to their highest levels in over two years.

Strong demand from China will likely put a floor under corn and soybean consumption in 2020-21, Capital Economics says; but with record expected yields in the U.S., we expect corn and soybean prices to come off the boil; a recovery in China’s hog numbers–now that African swine fever has been brought under control–should support demand for soybean-based animal feed; however, we also expect soybean supply to increase in response to this upturn in demand.

Speculators have likely placed record bullish bets for the time of year on Chicago-traded soybeans amid the historic rally in futures, and those bets may be within striking distance of the all-time high set more than eight years ago; in the week ended Sept. 15, money managers boosted their net long position in CBOT soybean futures and options to 191,774 contracts from 173,907 a week earlier, according to data published Friday by the U.S. Commodity Futures Trading Commission. 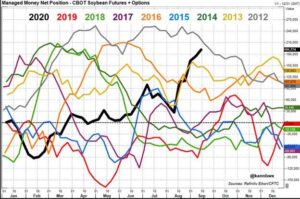 Alberta crop report – Reuters News: Over the past week, the southern half of the province remained dry, receiving less than one mm of rain; despite less favorable harvest conditions over the past week, producers across the province were able to combine an additional 12 per cent of their major crops; overall, about 30 per cent of major crops have now been harvested, on par with both the 5-year and 10-year averages (see Table 1), while 24 per cent are in swath.

China is directing authorities in East China’s Zhejiang province to start planning to build stockpiling bases for energy and agricultural products, part of a push to develop regional free-trade zones (FTZs), a government document said on Monday; Zhejiang FTZ should plan to build bonded storage and transfer centers for imported grains that can provide special quarantine approval and customs clearance on shipments, starting with soybean imports, the document said; facilities for the processing of high protein food such as imported beef will also need to be expanded.

U.S. lawmakers will consider two bills next week on goods made with forced labor from China’s Xinjiang region, House Speaker Nancy Pelosi said on Friday, with one that would restrict imports and another that would require disclosures from publicly-traded U.S. companies on their supply chains.

African swine fever and Covid-19 have led to volatility in China’s animal protein market, causing shifts in distribution channels and consumer behavior, Rabobank says; Chinese pork retail prices are expected to stay relatively high in the coming years, with consumption comparatively low, leading to opportunities for substitute meats such as poultry and beef

Russia’s September exports of wheat, barley and maize (corn) are estimated at 5.65 million tons, up from 5.10 million tons in August, the SovEcon agriculture consultancy said.

High demand from importers and concern over the winter harvest drove Ukraine’s 2020 export prices for 12.5% protein milling wheat around $9 per ton higher over the last week, APK-Inform agriculture consultancy said; Ukrainian 12.5% protein wheat prices stood at $228-$231 per ton on a free-on-board (FOB) Black Sea basis at the end of last week, the consultancy said in a report; for lower quality 11.5% protein wheat, the price was between $226 and $229 per ton FOB Black Sea.

South Africa remains on course to register the largest wheat crop in a decade thanks to timely, well-distributed rains across the country, says the chief economist at South Africa’s Agricultural Business Chamber; output in Africa’s No. 2 wheat producer will likely rise 28% to 2 million metric tons, boosted by good weather and farmland expansions; that will likely reduce imports, which climbed 32% last season to 1.8 million tons following a production slump.

Growth in demand for palm oil this year will be driven by domestic consumption as exports drop amid the COVID-19 pandemic, according to the Indonesian Oil Palm Association (GAPKI); Indonesia is expected to raise domestic consumption by 1.2 percent year-on-year (yoy) to 15.8 million tons in 2020, GAPKI data unveiled on Sept. 1; the growth will be entirely driven by the government’s 30 percent palm oil-mixed biodiesel (B30) program, which is expected to offset lower domestic demand for palm-oil based groceries.