Malaysian palm oil prices were down 40 ringgit at 3,676 (basis July) at midsession.

U.S. Weather Forecast: The United States remains mostly good for spring planting, although there will be some precipitation this week to disrupt field progress. Cold weather may damage some of the winter wheat in the southwestern Plains, northern Delta and North Carolina and Virginia, but losses should be quite low and mostly held to areas that are not key to U.S. production.

Concern about dryness will remain in West and South Texas, a part of the northern Plains, the Pacific Northwest and to some degree a part of northern and central Iowa to southwestern Wisconsin and southern Minnesota. Most of the dryness concerns will not be serious while temperatures are cool, but as soon as warming comes around at the end of April the situation will be of greater interest.

South America Weather Forecast: The bottom line for Brazil remains mixed with Safrinha corn and cotton benefiting from any rain that falls, but most of the rain that is advertised does not begin until late in the weekend leaving the door open for possible changes to next week’s outlook.

Argentina’s bottom line remains good for late season crops, but rain may slow some of the early season harvest and maturation pace. Summer crops will develop favorably, but there is need for drier weather to protect crop quality and to expedite harvest progress. 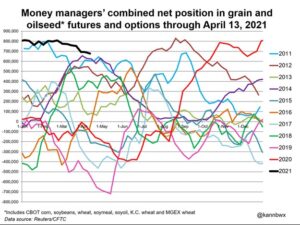 Speculators have been buying Chicago-traded corn since August when troubles began for the 2020 U.S. harvest, and that enthusiasm expanded even more last week as weather concerns are on the radar for the 2021 crop.

Russia’s April exports of wheat, barley and maize (corn) are estimated at 2.2 million tonnes, down from 2.4 million tonnes in March, the SovEcon agriculture consultancy said.

Bid export prices for this year’s Ukrainian rapeseed have risen by $35 this week on fears over crop conditions across Europe and a possible smaller sowing area in Ukraine, analyst APK-Inform said. Rapeseed costs $560-$570 a tonne CPT (carriage paid to) Black Sea with the delivery in July-August as of Friday. Ukraine has already started the 2021 rapeseed sowing and the area could total 1 million hectares, 10% less than a year earlier.

Export prices for Ukrainian sunflower oil have risen by about $45 a tonne over the past several days amid fears over possible export curbs, analyst APK-Inform said. Ukraine’s government is considering imposing curbs on sunflower seed exports and establishing a licence requirement for sunoil exports in a move that has been criticised by traders and producers. APK-Inform said sunoil export asking prices had risen to $1,570-$1,580 a tonne FOB Black Sea as of Friday.