South America Weather Forecast: Interior southern Safrinha corn areas of Brazil are still unlikely to receive much rain through at least the next seven to ten days. There will be some erratic showers; though, much of this will not be able to counter evaporation. Last evening’s GFS model run was notably wetter in Parana May 9 – 11.

Wire story reports words like ‘unprecedented’ have sometimes been used within the last year to describe price action for Chicago-traded corn futures, but now that term almost underrepresents the situation given the scope of the rally over the last several weeks. Spring rallies hardly ever cause American farmers to significantly increase their corn acreage plans between March and June, but this year could be different given both how early it is and how much prices have surged.

A crop rally in the U.S. is threatening to make essential food commodities dramatically more expensive, and the costs could soon spill over onto grocery store shelves. Wheat, corn and soybeans, the backbone of much of the world’s diet, are all surging to the highest since 2013 after gains last week had some analysts warning that a speculative bubble was forming. Bad crop weather in key producing countries is a major culprit. Dryness in the U.S., Canada and France is hurting wheat plants, as well as corn in Brazil. Rain in Argentina is derailing the soy harvest. Add to that the fears of drought coming to the American Farm Belt this summer. Meanwhile, China is gobbling up the world’s grain supplies, on track to take in its biggest haul of corn imports ever as it expands its massive hog herd.

North America’s freight rail customers, from grain shippers to logistics companies, are choosing sides as Canadian Pacific Railway Ltd and Canadian National Railway fight to buy Kansas City Southern. A takeout of KCS, would be the first major North American railroad combination in more than 20 years and create the first network to include the United States, Canada and Mexico. CN Canada’s biggest railroad, made an unsolicited $30 billion bid for KCS on Tuesday, topping CP’s agreed $25 billion bid, but CP said last week it was not considering raising its offer.

Potential yields of this year’s winter grain crops in the European Union have declined slightly since March as cold and dry weather hampered development and also delayed sowing of spring varieties, the EU’s crop monitoring service said. The average soft wheat yield in this year’s European Union harvest is expected to reach 5.86 tonnes per hectare (t/ha), down from an initial projection of 5.89 t/ha in March. That would be 2.6% above last year’s level and 2.9% above the average EU soft wheat yield of the last five years.

Soft wheat exports from the European Union in the 2020/21 season that started last July had reached 21.68 million tonnes by April 25, data published by the European Commission showed

That was down from 29.50 million tonnes cleared by the same week last season

European Union soybean imports in the 2020/21 season that started last July had reached 11.94 million tonnes by April 25. That compared with 11.82 million tonnes cleared by the same week last season.

Asian feed manufacturers are switching to wheat in animal rations as multi-year high corn prices constrict demand for the yellow grain widely used to fatten hogs and chickens. Some of the world’s top corn buyers such as China, South Korea and Vietnam are buying more wheat from Australia and the Black Sea region in the months ahead as the landed cost of corn has climbed to a rare premium to wheat. Combined, those three countries are forecast to buy 26.4% of global corn imports this year, according to the U.S. Department of Agriculture, so any substitution for wheat could have a large impact on global grain trade flows. 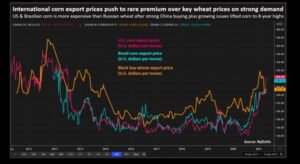