Malaysian palm oil prices were down 39 ringgit at 3,405 (basis March) despite higher export reports and a weaker ringgit.

Brazil weekend rainfall was erratic, but some of the rain from Argentina moved into the far south late Saturday and Sunday morning and it was advancing to the interior southern areas. Brazil weather over the next two weeks will become more typical of La Nina years meaning rain will fall more frequently from Mato Grosso, Goias and Tocantins to Minas Gerais, Sao Paulo and Parana.

Argentina rainfall was a little lighter than expected in some areas, but not by much. Argentina rainfall will be minimal this week; any showers that evolve will be too light and brief to counter evaporation and those areas missing the greatest rainfall Friday and early Saturday will experience rising stress of significance as the second week of the outlook begins unless greater rain evolves. The early next opportunity for generalized rain will occur Dec. 30-Jan. 2, but confidence is low. Argentina temperatures will be warmer than usual during the next two weeks and that on combination with the limited rainfall will lead to moisture depletion, crop moisture stress and rising worry over 2021 production potentials.

There were changes in registrations (Soyoil down 108, Soymeal down 25, HRS down 20)— 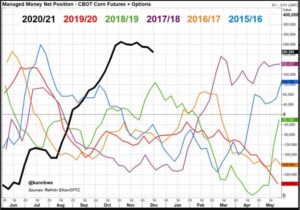 Chicago-traded grain and oilseed futures continued rising last week, and while speculators were buyers of soybeans, soy products and wheat during the period, they trimmed bullishness in corn for the third consecutive week.

China sold 593,161 tonnes of wheat, or 14.75% of the total offer, at an auction of state reserves last week, the National Grain Trade Centre said on Monday. The average selling price was 2,342 yuan ($357.54)per tonne, the trade centre said. The volumes sold at the auctions have declined steadily since October, as demand for use of the grain in animal feed has eased.

China has made solid progress in the modernization of its seed industry in recent years, an agriculture official said. The coverage rate of improved crop varieties has exceeded 96 percent, said Zhang Taolin, vice minister of agriculture and rural affairs, at a recent work meeting, adding that these varieties have played a significant role in ensuring consecutive bumper harvests and sufficient farm produce supply in the country.

China will industrialise biotech breeding as part of a campaign to improve food security, top leaders said in a policy statement late on Friday, signalling Beijing could soon take a further step towards commercialising genetically modified (GM) crops. According to a statement issued after the annual Central Economic Work Conference held on Dec. 16-18, China needs to make better use of science and technology to achieve a “turnaround” in its seed industry.

Brazil’s production of livestock feed increased about 5% this year as a booming domestic meat industry weathered the COVID-19 pandemic largely unscathed, feed industry lobby Sindirações said on Friday. The country produced an estimated 81.1 million tonnes of livestock feed and mineral salts this year, despite headwinds from the pandemic and higher prices for grains like corn, which raises costs.

Argentine oilseed workers and grains inspectors continued a more than week-old on strike on Friday, bogging down soymeal production and agricultural exports with no sign that a wage deal might be reached in the short term. Soymeal manufacturing and export companies have been in talks with oilseed workers’ unions over a 2021 compensation deal. Both sides accuse the other of intransigence.

Russia will impose tariffs on the export of soybeans and scrap metal to ensure domestic firms have sufficient raw materials, the Economy Ministry said. Russia’s export duty on soybeans, which will come into force on Feb. 1 and last until June 30, will be 30% and there will be a minimum price of 165 euros per tonne, the ministry said. It said the tariff on soybeans was a response to increasing global prices. Russia on Tuesday imposed a grain export quota and a wheat export tax in a bid to stabilise food prices. President Vladimir Putin criticised food price inflation earlier this month.

Russia’s December exports of wheat, barley and maize (corn) are estimated at 3.7 million tonnes, down from 4.7 million tonnes in November, the SovEcon agriculture consultancy said.

Ukraine’s economy ministry cut its grain export forecast for the 2020/21 July-June season to 44.175 million tonnes from the previous forecast of 44.823 million due to smaller corn shipments, ministry data showed; the data showed that the ministry, which revised down the country’s 2020 total grain and corn harvest, cut 2020/21 corn export forecast to 22.255 million tonnes from 22.982 million.

Ukrainian sunflower oil export prices continued their rally over the past week, adding $60 to $65 per tonne due to stable demand from importers, consultancy APK-Inform said on Monday. Bid-ask sunoil export prices rose to a range of $1,170 to $1,185 per tonne FOB (free on board) Black Sea for January-March delivery,