Overnight trade has SRW Wheat up roughly 1 cent, HRW up 3; HRS Wheat up 6, Corn is up 5 cents; Soybeans up3; Soymeal unchanged, and Soyoil up 5 points.

Malaysian palm oil prices were up 18 ringgit at 3,540 (basis May) having followed rival vegoils and on talk of supply tightness.

Argentina will be very warm to hot and experience net drying conditions in many areas during the coming ten days after a few early week thunderstorms. Argentina’s bottom line is still one of concern about net drying.  Some showers will be around, but it will be hard for many areas to get enough rain to seriously bolster soil moisture for improved crop and field conditions. Temperatures are going to be very warm to hot and that will accelerate drying rates resulting in a rising amount of plant stress during the forecast period of the week and possibly a little longer.

Brazil’s general weather theme for the next ten days has not changed much since Friday. Brazil’s bottom line is mostly good for southern Brazil with infrequent rainfall occurring in the next ten days to support the maturation and harvest of soybeans as well as the planting of Safrinha crops. Sufficient amounts of soil moisture and/or rainfall will occur to support ongoing full season and second season crop development.  In the meantime, northern Brazil will continue fighting a wetter bias that will result in slow soybean harvest and Safrinha planting rates and could raise a little crop quality issue in a few areas.

U.S All Wheat sales are up 5%, shipments down 2% with the USDA forecasting a 2% increase

By class, HRW wheat sales down 5%, shipments unchanged, with USDA down 2%

U.S. stockpiles of corn and soybeans are expected to increase slightly by the end of the 2021/22 marketing year, the U.S. Department of Agriculture (USDA) said on Friday, indicating a large crop planted this spring would alleviate some supply concerns. With high prices seen as encouraging farmers to expand plantings of corn and soybeans to 182 million acres (73.7 million hectares), the most on record for the two crops combined, the USDA projected.

Speculators’ unusually bullish bets combined across Chicago-traded grains and oilseeds have been largely unchanged since late December based on thinning stockpiles and strong demand, especially for soybeans and corn. That trend compares well with the same period in early 2011 and is near the historical max, but funds had slowly reduced bullishness into March and April of that year. However, speculators did not turn net bearish on grains and oilseeds until July 2013, a bullish streak that started in March 2009. Within the last five years, funds have held a collective net short 60% of the time, though they have been net long since August 2020. Most-actively traded CBOT corn, soybean and wheat futures are stronger than in late December, but they are currently trading off their recent highs. 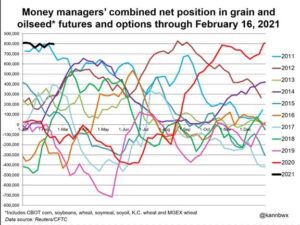 Strong demand for meat both on the export front and at home as COVID-19 restrictions begin to ease has sent Chicago Mercantile Exchange lean hog futures to contract highs over the last couple of weeks. The historic winter blast across the country and elevated pork prices in China have also been supportive. Investors’ optimism toward hogs has been on the uptrend, increasing sharply in the week ended Feb. 16.

One of America’s leading pig slaughterhouses is running faster than ever as meatpackers hustle to keep pork in grocery stores during the COVID-19 pandemic. A plant worker says it’s time to slow down. Sought medical treatment in January for tendons he strained in his right arm while draining blood from pigs in a Seaboard Foods pork plant in Guymon, Oklahoma.

Canada’s Olymel LP said on Friday it was shipping pigs to the United States to help clear a backlog of slaughter-weight hogs after it had to temporarily close its Red Deer, Alberta, plant because of a coronavirus outbreak. Olymel shut the plant on Wednesday and declared force majeure – unforeseeable circumstances that prevent contract fulfilment. The Alberta backlog amounts to 80,000-90,000 hogs, and Olymel hopes to clear it four to five weeks after the plant reopens adding the timing of reopening was unclear.

China will put greater pressure on its regions to boost grain yields and step up support for its domestic seed industry as it strengthens its focus on food security after the COVID-19 pandemic, a major policy document issued late Sunday showed. The annual rural policy blueprint, known as the “No. 1 document”, placed greater emphasis on food security than in prior years, calling for all provinces to improve grain yields during the 2021-2025 period. Beijing, which has long prioritised food security for its population of 1.4 billion, has strengthened its focus on the issue since the pandemic hit major food exporting nations last year and raised concerns about stability of food supplies.

China’s major grain-producing province Heilongjiang aims to keep its annual grain production above 75 million tonnes this year, with its grain planting area reaching 14.46 million hectares, according to a work report from the provincial government. Heilongjiang plans to add more than 673,000 hectares of high-standard farmland this year, according to the report delivered at the annual session of the provincial legislature, which opened on Friday. The northeastern province saw a bumper harvest last year despite the impacts of the COVID-19 epidemic and typhoons, with the annual grain yields reaching 75.4 million tonnes.

Brazilian oilseeds trade lobby Abiove is launching a tool to monitor farmers’ fulfillment of soy contracts, as global merchants seek to secure deliveries of grains sold in advance in the 2020/2021 cycle. The initiative comes as Brazilian farmers presold half of their soy crop by last August, an unprecedented amount, sparking fears among trading companies that some could fail to deliver grains and force a contract renegotiation. Robust demand from China sent soy prices soaring to multi-year highs in recent months, causing some Brazilian farmers to regret pre-selling so much soy before a single seed had been sown last year.

Argentina’s barley exports to China are set to soar to a record 1 million tonnes in 2021, industry sources and sales data show, as Beijing looks beyond its traditional top supplier Australia amid a lengthy diplomatic standoff between the two countries. The sales bonanza, revealed by industry sources in Argentina and China, underscores how the South American grains powerhouse is plugging the supply gap that opened last year after diplomatic tensions led China to slap a 80.5% tariff on Australian barley.

Russian wheat export prices rose this week after declining for the past month, following a rise in wheat prices in Chicago. Russian wheat with 12.5% protein loading from Black Sea ports for supply in March was at $283 a tonne free on board (FOB) at the end of the week, up $5.5 from the previous week, agriculture consultancy IKAR said. Refinitiv said wheat prices rose by $2 to $284.5. Sovecon, another Moscow consultancy, said barley was unchanged at $248.

Russia’s February exports of wheat, barley and maize (corn) are estimated at 3.4 million tonnes, up from 3.2 million tonnes in January, the SovEcon agriculture consultancy said.

Ukrainian soft milling wheat export prices remained almost unchanged over the past week, APK-Inform agriculture consultancy said. Asking prices for Ukrainian-origin 12.5% protein wheat stood at $278 to $285 per tonne FOB Black Sea, the consultancy said in a report. Lower quality 11.5% wheat was quoted between $276 and $284 per tonne. APK-Inform said export prices for Ukrainian corn added $2 a tonne to $259-$262 while barley prices have risen by $4-$6 a tonne to $253-$261 FOB Black Sea.

Ukraine’s corn export is likely to rise to 2.8 million tonnes in February and to 2.85 million tonnes in March from 1.99 million tonnes exported in January, Ukrainian traders union UGA quoted economy ministry’s data as showing. Ukraine has sold abroad 30.9 million tonnes of grain so far in the 2020/21 July-June season, almost 21% less than in the same period a season earlier.

Euronext front-month wheat futures pared gains in late trading on Friday after touching a 7-1/2 year high fuelled by short-covering in a market facing tightening physical supplies. March milling wheat added as much as 2.2% to 242.75 euros ($294.63) a tonne, the highest front-month price since May 2013. May futures on Euronext were up 0.2% at 226.75 euros, after reaching a four-week high of 229 euros, while new-crop delivery months were slightly lower.

Malaysian crude palm oil prices are projected to peak in 1H before declining in 2H as weather conditions are likely to normalize and improve supplies of the edible oil, CGS-CIMB says. However, persistent foreign-labor shortages and slow replanting and new planting activities amid pandemic disruptions could cap the growth of palm oil supply and keep CPO prices at an elevated level.