Malaysian palm oil prices were up 126 ringgit at 3,670 (basis May) following rival oils.

Most of Brazil will continue to be favorable; though, some areas will still be wetter than preferred.

Wire story had less than two years ago the United States was drowning in excess soybean supplies, mostly due to trade interruptions with top buyer China. But relative to domestic demand, U.S. stockpiles are forecast to be record-tight later this year, and according to the U.S. Department of Agriculture, not even a record crop this summer can ease the situation much by mid-2022. 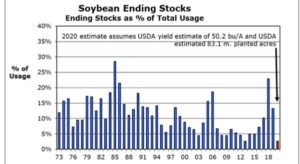 Condition ratings for winter wheat declined during February in Kansas, the top U.S. winter wheat producer, but monthly ratings were mixed in other Plains states, the U.S. Department of Agriculture said. The USDA issued its last national winter wheat ratings for 2020 on Nov. 30, reporting 46% of the U.S. crop in good to excellent condition as of Nov. 29.

The U.S. Environmental Protection Agency will not act on any pending petitions from small refiners for exemptions to U.S. biofuel blending laws until after the Supreme Court reviews a related case.

Showers on Argentina’s Pampas grains belt in recent weeks have helped make up for the dryness that parched soy and corn crops from the middle of last year, weather experts said on Monday. Farmers are now hoping for enough rain to boost yields after the country’s two main cash crops were hit by an unusual lack of precipitation before a resurgence of wet weather in January.

Ukraine have sharply increased milling wheat imports so far this season due to a jump in domestic prices, analyst APK-Inform said. The country, which has exported around 13 million tonnes of wheat so far 2020/21 July-June season, has imported 14,500 tonnes of the commodity to the date, the consultancy said.

European Union soybean imports in the 2020/21 season that started last July had reached 9.36 million tonnes by Feb. 21. That compared with 9.13 million tonnes cleared by the same week last season.

Euronext front-month wheat on Monday remained close to the 7-1/2 year highs hit on Friday, as concern about tightening supplies and strong demand continued to fuel a global rally on wheat markets. March milling wheat was up 0.4%, or 1.0 euro, at 239.75 euros ($291.0) a tonne. The contract earlier on Monday hit 241.75 euros, close to Friday’s peak of 242.75 euros a tonne, the highest front-month price since May 2013.

South African maize farmers are expected to harvest 10% more of the staple crop in the 2020/2021 season compared with the previous season, despite heavy rainfall in parts of the country, a Reuters survey showed. South Africa’s Crop Estimates Committee (CEC) is expected to peg maize production at 16.872 million tonnes for the 2020/2021 season, up from the 15.300 million tonnes planted last season.