Malaysian palm oil prices were up 37 ringgit at 3,679 (basis May) on ideas higher inventories may take time to rebuild.

In Argentina, net drying will still continue in most of the region through Mar. 10. Crop stress will intensify as a result; though, erratic rain in the north and far east through Thursday will help temporarily slow the drying process, especially locally. Greater rain is still a possibility later in week 2 of the outlook. Last evening’s GFS model run removed rain in much of the nation Mar. 15 – 17.

Rain in Brazil will be beneficial for crop development; however, the south will be notably wet through Saturday leading to some fieldwork delays. Far southern and interior southern Brazil are likely to trend drier next week which will benefit fieldwork advancement.

Wire story reports the United States for many decades had been known as the world’s breadbasket, leading the way in corn, soybean and wheat exports. But although trade volumes remain historically high, the country’s relative impact on global exports is smaller than ever. High grain and oilseed prices, increasing global demand and weaker currencies have all contributed to the decline in U.S. export dominance. In recent years, U.S. crop shortfalls between 2010 and 2012 permanently reduced the country’s market share and contributed to the rise of competing producers. Today, the United States exports just over a quarter of the world’s corn, wheat and soybeans, compared with more than half some 30 years ago. The country also grows about a quarter of those global crops, a smaller portion than in previous decades, though the decline is much less extreme versus that of exports. 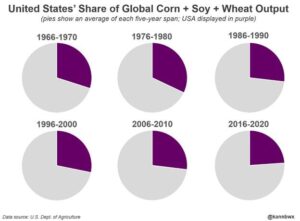 While US farmers see current market conditions as supportive for agriculture, that optimism is increasingly starting to fade looking toward the next marketing year. According to a survey conducted jointly by Purdue University and the CME Group, an index tracking farmers’ future expectations has dropped 20% since hitting a high in October. “Concerns about possible policy changes affecting agriculture, and eroding confidence in future growth in ag trade, continue to weigh on producers’ future expectations. However, farmers view near-term conditions as supportive for agriculture, and land values are seen as on the rise.

Senator Criticizes House Leaders’ Move to Cut Ag Disaster From Coronavirus Aid Bill. In the $1.9 trillion aid package that passed the House early Saturday, House leaders stripped a provision that would provide aid for farmers suffering from crop losses in 2020. Grassley said he will push fellow senators to reinstate the agricultural-disaster language in the bill. House Democratic leaders stripped a provision from the latest aid package that would have helped farmers suffering from crop losses — including losses due to high winds or derechos — before the House held its early Saturday vote on coronavirus aid relief.

An outbreak of African swine fever has been confirmed in piglets being illegally transported through Funing county in China’s southwestern province of Yunnan, the farm ministry said. The case comes amid growing concern that a severe wave of disease in recent months has hit China’s hog herd.

Argentina has seen a strong uptick in foreign currency inflows on the back of high global grains prices, reducing the risk of a sharp near-term devaluation of the peso currency and giving the government breathing room to slow pedal economic reforms. The South American country, a major producer of soy, corn and wheat, has acted to protect the peso and foreign reserves with strict capital controls since a market crash in 2019. That had stoked fears of a sudden correction. However, with bumper global grain prices easing the FX situation and the central bank reining in its funding of the Treasury, the government has signaled a slower depreciation of the peso ahead, calming investor worries.

Benchmark wheat futures on Euronext edged higher on Monday, supported by a rebound in U.S. prices and tight short-term availability in Europe. May milling wheat settled up 1.75 euros, or 0.8%, at 232.00 euros ($280.23) a tonne. The contract held below a one-month high of 233.75 euros touched last week. Front-month March futures, which expire next week, fell 2% to 245.00 euros a tonne, retreating from Monday’s peak of 252.75 euros that was a highest front-month price since May 2013.

Slowdown of rainfall maintains our 2020/21 Indonesia palm oil production estimates at 46.0 [43.3-59.7] million tons. Flooding woes were gradually eased in most of the key palm oil producing provinces, beneficial for harvest activities and logistics.

Macroeconomics: The Day Ahead for 21 September