In Argentina, dryness is still an issue; though, some erratic shower and thunderstorm activity will increase later this week and especially in the first half of next week. Due to the erratic nature of the rain, some pockets will not get much; however, the situation will at least improve some from what is has recently been.

In Brazil, conditions will continue to be favorable in most of the nation’s key crop areas. There will be some fieldwork delays though where rain is heaviest, particularly in the north.

Significant precipitation is still expected late Wednesday into Sunday from the Hard Red Winter Wheat Region through the Corn Belt. The Delta will be impacted mostly Sunday. The significant moisture may also get up into the southeastern part of the Northern Plains.

Record U.S. corn sales, especially those to China, mean that exporters will be extremely busy for at least the next six months. But they no longer need to set new records, as the recent corn shipping pace has sufficiently boosted the efforts. Updated figures from the U.S. Department of Agriculture on Monday placed corn export inspections, a proxy for actual exports, at 2.05 million tonnes for the week ended Feb. 25. That is the second-largest volume for any week behind the one ended Nov. 30, 1989, with 2.3 million tonnes.

Weekly export data suggests soybean shipments did not notch a new high last month. But about 87% of USDA’s full-year export forecast of 2.25 billion bushels (61.2 million tonnes) had been fulfilled in the first six months of 2020-21. That is well above the recent average of around 70%.

Soybean export sales as of Feb. 25 covered 98% of the target and 2020-21 ending stocks are seen hitting seven-year lows, meaning there are very few U.S. beans left to sell on the export market. This should allow corn shipments plenty of room to dominate in the next six months, a large portion of which will be bound for China.

The U.S. Department of Agriculture’s (USDA) National Agricultural Statistics Service in a weekly crop report on Monday rated 36% of the Kansas winter wheat crop in good to excellent condition, down from 37% a week earlier.

The U.S. departments of agriculture and energy plan to change two closely watched monthly reports to account for the rapid growth of renewable diesel, a clean burning fuel made from soy and other fats and oils. Surging demand for renewable diesel is part of a larger global transition to green fuels, and could increase prices of crops such as soybeans and canola it is derived from. The U.S. Department of Agriculture (USDA) plans to adjust how it reports soyoil used in biofuel in its monthly World Agriculture Supply and Demand Estimates (WASDE) report as soon as this spring. The unusual change to USDA’s WASDE report, viewed as the global gold standard of agricultural commodities data, would be an acknowledgment of the strong demand potential for soyoil at a time U.S. soybean supplies are the lowest in years.

Three ships carrying ethanol were heading to China from the U.S. Gulf Coast in a sign that exports of the fuel were sharply increasing from the United States to the country. The shipments may surpass the total amount of U.S. ethanol that China imported last year, a positive development for the U.S. ethanol industry, which has seen decreased demand because of the coronavirus pandemic and the U.S.-China trade war. The ships each have a capacity of around 30,000 tonnes, or about 240,000 barrels of ethanol though the exact amount of the renewable fuel onboard was not immediately clear. It was also unclear when the cargoes would arrive in China, which buys U.S. ethanol for fuel to blend with gasoline. At least two of the tankers left at the end of February. The three cargoes should be among vessels booked earlier, and more were expected to get shipped to China in the coming months. 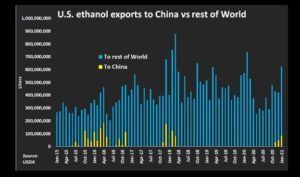 China’s agriculture ministry on Tuesday raised its forecast on rapeseed oil output in 2020/21, on increased acreage of the oilseed. China’s rapeseed oil output is seen at 5.43 million tonnes, up from last month’s forecast at 5.32 million tonnes, as the planting acreage of rapeseed grown in the winter went up by 4 million mu (266,700 hectares), the Ministry of Agriculture and Rural Affairs said. Ample rains and high temperature in main production regions of rapeseed also facilitated growth of the crop, the ministry said.

China will auction 10,000 tonnes of frozen pork from state reserves on March 10, according to a notice by the China Merchandise Reserve Management Center.

Selected highlights from a report issued by the U.S. Department of Agriculture’s Foreign Agricultural Service post in Beijing:

China’s cattle herd will continue increasing in 2021 as producers expand their herd in response to strong domestic beef prices. Although, beef production will be constrained by competitive beef imports and high feed prices.

Pork Production: Pork production in 2021 is forecast to increase by 14% following record low rates in 2020 as expansions by large companies over the last two years come into use. However, even with expansion in 2021, pork production will remain below pre-ASF (African swine fever) levels, keeping domestic prices relatively strong.

Pork Imports: Competitively priced imported pork and pork products will continue being an important component of the domestic pork supply. Pork imports in 2021 are forecast to reach 4.5 million metric tons as consumers are increasingly receptive to chilled or frozen pork.

Brazilian farmers reaped less soybeans than expected from fields last week as rains continued to disrupt the work of the harvesters in the world’s largest producer of the oilseeds, agribusiness consultancy said AgRural. Bean quality is also being affected by damp conditions

Brazilian farmers had harvested an estimated 35% of the planted soybean area through last Thursday, the slowest pace in a decade amid March rains. At the same time a year ago, 49% of the area had been reaped in Brazil. Excess humidity now is also creating a transportation problem, as grains need more time to dry, leading to longer waiting time for truckers.

Delays to reap soy have affected the pace of second corn crop planting in Brazil, as farmers have sown only 54% of the estimated area for the cereal compared with 80% in 2020. Second corn is planted in the same areas as soybeans and will represent around 80% of Brazil’s annual production this season.

Argentine grains farmers are expected to rake in a record amount of much-needed export dollars this season, with high global prices, port strikes having been defused and enough rain to relieve growing areas that had been dry for months. This year’s harvest is crucial for the sector and Argentina’s central government, which needs to refill its depleted foreign currency reserves after a sovereign default last year which has left bond prices at historic lows. The 2020/21 agricultural season should generate, at current prices, a record income of foreign currency from exports of about $37.5 billion.

Argentine wheat sowing is likely fall this year as farmers calculate the risk of state intervention in the market while new Chinese demand for South American feed barley is expected to induce some growers to switch crops.China’s usual barley supplier Australia has been sidelined due to a bilateral trade dispute. This leaves Argentina as a key supplier, along with France and Canada, to the world’s top commodities importer. Wheat and barley compete for sowing area on Argentina’s Pampas grains belt. Both are planted around midyear.

Russia’s February exports of wheat, barley and maize (corn) are estimated at 4.3 million tonnes, up from 3.2 million tonnes in January, the SovEcon agriculture consultancy said.

European Union soybean imports in the 2020/21 season that started last July had reached 9.94 million tonnes by March 7, data published by the European Commission showed. That compared with 9.70 million tonnes cleared by the same week last season

European wheat prices rose on Monday, supported by the export-boosting weakness of the euro and the long-awaited return of Algeria with a purchase tender. Most-active May wheat was up 0.8%, or 2.0 euros, at 230.25 euros ($272.9) a tonne. Front month March, which expires on Wednesday, was up 2.5% at 237.50 euros a tonne.

India’s palm oil imports are set to rebound in March and April to meet rising demand from hotels and restaurants, as lower shipments last month have depleted stocks. Higher imports by India is likely to support benchmark Malaysian palm oil prices that hit their highest level in a decade on Monday.

Malaysia is targeting to export 75 billion ringgit ($18.2 billion) worth of palm oil and palm-based products this year, the commodities minister said. This is an increase from 72.8 billion ringgit in 2020.