Malaysian palm oil prices were down 32 ringgit at 2,979 (basis January) ahead of U.S. elections, economic lockdowns.

U.S. Weather Forecast: The 6 to 10 day time frame for the Midwest has dry weather to dominate with temps running above average. The Southern Plains might have front brings some precip to the eastern sections of KS, OK early next week. Temps run above average.

South America Weather Forecast: The Brazilian growing regions has hit and miss, moderate rainfall amounts for 75% of the area over the next 6 to 10 days. Temps will be below average for the week ahead turning to average to a bit above by the end of the week/weekend. The Argentine growing regions continues with limited rainfall over the next 6 to 10 days. Temps run below average.

Deliveries were 501 for Soybeans. 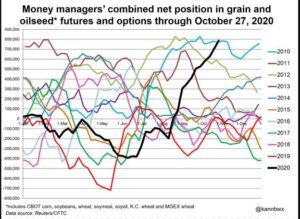 Speculators’ overall optimism about Chicago-traded grains and oilseeds rose last week to within striking distance of record bullishness for any time of the year, and that largely owed to strong buying in corn; but increasing pandemic fears and improving crop weather went against bulls late in the week; combined across Chicago corn, wheat, soybeans and products, and Minneapolis and Kansas City wheat, investors through Oct. 27 bought nearly a million futures and options contracts since the rally began in mid-August, the most ever for such a period.

The United States and Brazil, the two leading ethanol producers, see potential for a large increase in global use of the biofuel as an outright way to cut carbon emissions while the world transitions to all-electric cars, according to industry representatives this week; there is a lot of hope (to cut emissions) related to electric vehicles, but the current fleet will still be around for a long time,” said the director for ethanol market development at the U.S. Grains Council, adding that biofuel blending in combustion engine cars is the quickest way to improve air quality.

China’s state planner has set the minimum purchasing price for wheat in 2021 at 2,260 yuan ($338) a ton, up 0.9% from 2,240 yuan/ton this year, it said on Friday; China buys wheat from farmers at the minimum price when the market price drops below that level; the National Development and Reform Commission said separately that it had set the volume of wheat to be purchased at minimum price next year at 37 million tons, unchanged from the 2020 level.

China sold 2.699 million tons of wheat from state reserves last week, continuing strong sales from the previous week, the National Grain Trade Center said as users scrambled to stock up on the grain amid soaring corn prices; China sold 67.74% of the wheat put up for auction during a weekly sale, according to a statement on the trade center’s website, as feed makers bought the grain to substitute corn, which is getting increasingly expensive on tightening supplies.

Argentina’s government said on Friday that Chinese state grain stockpiler Sinograin would increase purchases of its soybeans and soy oil by around 1 million tons in 2021, an important boost as Argentina looks to ramp up exports; the South American country’s Foreign Ministry said in a statement that Sinograin intended to increase purchases of soy beans to 4 million tons next year from 3 million expected this year. Soybean oil purchases would also rise, to 400,000 tons from 300,000 tons under an earlier agreement.

China has rejected Australia’s appeal to scrap a tariff on its barley exports all but closing the door on a trade worth about A$1.5 billion ($1.05 billion) in 2018; the rejection comes after Australia sought a formal review over duties totaling 80.5% that China imposed this year, citing as grounds subsidies and dumping, activities that Australia has denied.

Argentina’s main oilseed crushers union cut short a 24-hour strike late on Friday after government intervention ordering workers and companies back to the negotiating table to reach a deal over coronavirus pandemic bonus payments; the strike that began at noon had been lifted after the government issued a mandatory conciliation order.

Lower global grain prices and improved prospects for the 2021 harvest have cut Ukrainian wheat export prices by $6 per ton over the last week, APK-Inform agriculture consultancy said; in October, high demand from importers and worries over delay in winter wheat sowing pushed Ukraine’s milling wheat export prices to the highest in two seasons; Ukrainian 12.5% protein Black Sea wheat prices rose to $249-$253 per ton FOB Black Sea at the end of last week; for the lower-quality 11.5% protein wheat, prices were between $247 and $251 a ton FOB.

Ukrainian sunflower oil export prices rose $10-$15 per ton over the last week due to stable demand from importers, consultancy APK-Inform said; bid-ask sunoil export prices rose to $990-$1,005 per ton FOB (free on board) Black Sea for November-December delivery; Ukrainian sunoil producers’ association said last week sunoil exports may fall to 5.6 million tons in the 2020/21 September-August season from around 6.6 million in 2019/20.