Overnight trade has SRW Wheat down roughly 9 cents, HRW down 13; HRS Wheat down 4, Corn is down 2 cents; Soybeans unchanged;  Soymeal down $2.00, and Soyoil up 50 points.

U.S. Weather Forecast: U.S. hard red winter wheat areas are now expecting significant rain, freezing rain, sleet and snow in some of the driest areas during the early to middle part of this week

South America Weather Forecast: Brazil rainfall was sufficient for a notable boost in soil moisture in Minas Gerais and Goias where rain totals varied from 0.60 to more than 1.50 inches; lighter and more sporadic rain occurred in other areas of Brazil allowing fieldwork to advance, although pockets still need significant rain. Brazil’s rainfall is similar for the coming ten days as to that of Friday; rain will fall in most of the nation at one time or another, but rainfall will be least frequent and least ignificant in the interior south. Argentina weekend rainfall was sufficient for a notable boost in soil moisture and improved soil and crop conditions; rainfall varied from 1.00 to 2.50 inches in heart of summer crop country with local totals to 3.00 inches. Argentina will receive additional rain into Monday morning and then a few follow up showers Tuesday and Wednesday before dry weather occurs for about a week.

Europe/Black Sea Region Forecast: Brief periods of precipitation will move across the European continent over the coming week resulting in a favorable mix of moisture and sunshine for winter crops; fieldwork will advance around the precipitation; this weekend and next week should trend drier; temperatures will be near to above average. Western CIS crop weather this week will bring erratic precipitation and warmer than usual temperatures; winter crops are turning dormant in the west and north which is normal. Ukraine precipitation will be limited after this week with the best chance for moisture during mid- to late-week. 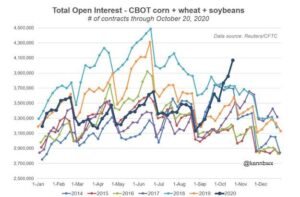 China has substantially increased purchases of U.S. farm goods and implemented 50 of 57 technical commitments aimed at lowering structural barriers to U.S. imports since the two nations signed a trade deal in January, the U.S. government said; in a joint statement, the U.S. Trade Representative’s (USTR) office and the U.S. Department of Agriculture (USDA) said China had bought over $23 billion in U.S. agricultural goods to date, or about 71% of the target set under the so-called Phase 1 deal; since the Agreement entered into force eight months ago, we have seen remarkable improvements in our agricultural trade relationship with China, which will benefit our farmers and ranchers for years to come,” U.S. Trade Representative Robert Lighthizer said

Chinese Vice Premier Hu Chunhua has stressed the need to strengthen agricultural production, including the planting of autumn and winter crops, to lay a good foundation for the next year; solid work in autumn and winter planting is vital for securing next year’s harvest,

Chinese leaders met Monday to formulate an economic blueprint for the next five years that is expected to emphasize development of semiconductors and other technology at a time when Washington is cutting off access to U.S. technology

The prices of live pigs in China declined 5 percent in mid-October compared to the previous 10 days, data from the National Bureau of Statistics (NBS) showed

Brazilian food processor BRF SA said on Friday that Chinese authorities have authorized the company to resume exports from its chicken plant in the town of Dourados that had been banned since July over coronavirus concerns.

Russia’s October exports of wheat, barley and maize (corn) are estimated at 5.00 million tons, down from 5.65 million tons in September, the SovEcon agriculture consultancy said.

High demand from importers and rapid wheat exports have helped Ukraine’s 2020 milling wheat export prices to increase by about $7 a ton over the past week, agriculture consultancy APK-Inform said; Ukrainian 12.5% protein Black Sea wheat prices stood at $255-$258 a ton free on board (FOB) at the end of the week; for lower-quality 11.5% protein wheat, prices were between $253 and $256 a ton FOB.

Ukrainian sunflower oil export prices have risen $15-$20 per ton over the last week due to steady demand from importers, APK-Inform consultancy said; bid-ask sunoil export prices rose to $985-$995 per ton on a free on board (FOB) Black Sea basis for October-November delivery; the Ukrainian sunoil producers’ association said last week sunflower oil exports may fall to 5.6 million tons in the Sept. 2020-Aug. 2021 season from around 6.6 million in 2019/20 due to a smaller sunseed harvest and sunoil output

Maize harvesting is in full swing in Europe and the effects of summer drought are being seen in contrasting yields, which could push down production this year despite a sharp increase in plantings, analysts said; forecasters have made steep cuts to their estimates of the European Union-wide maize harvest due to drought, and consultancy Strategie Grains last week reduced its outlook to below last year’s production.

Sudanese and Israeli officials will meet in the coming weeks to discuss a package of cooperation deals to “achieve the mutual interests of the two peoples,” Sudan’s Foreign Ministry said; the ministry statement came three days after President Donald Trump announced that Sudan would start normalizing ties with Israel; the statement said the deals would cover agriculture, trade, aviation and migration, but did not provide details on the timing or location of the meetings.