Overnight trade has SRW Wheat unchanged, HRW up 4 cents; HRS Wheat up 2, Corn is up 3 cents; Soybeans up 1; Soymeal unchanged, and Soyoil up 5 points.

In Argentina, net drying is expected in much of the region through next Wednesday. There will be some increase in erratic shower and thunderstorm activity Monday through Wednesday; though, this is likely to favor the west.

In Brazil, conditions are still expected to be favorable for crops in most of the nation. Rain through next Wednesday will be notably significant from Mato Grosso through Minas Gerais and some immediate nearby areas. This will notably improve soil moisture in a large portion of the northeast.

US President Joe Biden’s pick to lead the Environmental Protection Agency said on Wednesday he will consult with general counsel to understand the options available for a program that exempts small refiners from biofuel blending obligations. Michael Regan, formerly head of North Carolina’s environmental regulator, said waiting for a ruling from the Supreme Court on a case related to the program was “one way to go.” He also emphasized transparency and communication around the waiver program and committed to following the law.

World food prices rose for an eighth consecutive month in January, hitting their highest level since July 2014, led by jumps in cereals, sugar and vegetable oils, the United Nations food agency said on Thursday. The Food and Agriculture Organization’s food price index  averaged 113.3 points last month versus an upwardly revised 108.6 in December. The December figure was previously given as 107.5. The Rome-based FAO also said in a statement that worldwide cereal harvests remained on course to hit an annual record in 2020, but warned of a sharp fall in stocks and signalled  unexpectedly large import demands from China.

Argentine agricultural exports were disrupted on Wednesday as truckers blocked roads around the Buenos Aires ports of Bahia Blanca and Quequen and authorities cleared roads near the main export hub of Rosario.  Concern over the road blocks still meant reduced numbers of cargoes arrived at Rosario, raising doubts about future shipping flows from the hub that ships some 80% of Argentina’s grains exports. Chambers representing the soy, corn and wheat industries in Argentina issued a joint statement asking the national government to come up with a solution to the drivers’ demands.

Inflation-hit truck drivers are pressing demands for lower taxes, tolls and fuel prices as well as the establishment of set fee schedules to be paid by farmers for ground transportation. Mired in recession since 2018, Argentina had more than 36% inflation last year and 4% in December alone.

Wire story reports Argentina’s upcoming corn and soybean harvests will not be among the country’s best on record, but they certainly seem to have averted possible disaster a la 2018 after a historically dry start. Above-average rainfall in January went against the general dry trend common across Argentina during a La Nina, the cool phase of the equatorial Pacific Ocean. This brought much-needed moisture to the crops, which as of last week were mostly in good condition. But the La Nina pattern is still in place, and Argentina is not yet out of the woods as the forecast has turned dry through mid-month, just as crops begin to enter the critical stages for yield formation. As of Jan. 28, data from Argentina’s agriculture ministry suggested that the portions of soybeans in good or very good condition in Buenos Aires, Cordoba and Santa Fe were roughly 83%, 90% and 96%, respectively. Those three provinces account for three-quarters of the country’s planted area. 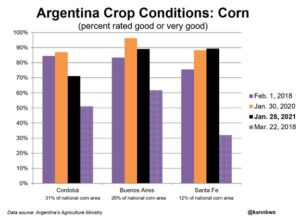 Russia may launch its own price benchmarks for calculation of a formula-based export taxes for wheat, barley and corn, which officials are discussing, Interfax new agency reported; Moscow is trying to reduce wheat exports to help curb rising domestic food prices. It imposed the tax of 25 euros ($30) per tonne for Feb. 15 to 28, rising to 50 euros/tonne from March 1. It also plans to switch to a more complicated formula-based regime sometime between April 1 and July 1. The formula may be set at 70% of the difference between the price of wheat per tonne and $200,

India’s southern state of Andhra Pradesh will use a deepwater port to export rice for the first time in decades amid a global shortage of the grain, according to a government order which could raise shipments this year by a fifth.

Indonesia’s palm oil exports fell 9% last year as global demand was disrupted by the coronavirus pandemic, the Indonesian Palm Oil Association (GAPKI) said while forecasting exports would recover in 2021. Indonesia exported 34 million tonnes of palm oil and its refined products in 2020. Exports to China and Europe dropped last year, while shipments to India and Pakistan still saw some growth. Output of the oil stood at 47 million tonnes last year, down slightly from 2019. Domestic use of palm oil in 2020 was around 4% higher despite lower demand from hotels and restaurants.