Macroeconomics: The Day Ahead for 29 September

As yesterday’s gyrations following the BoE’s decision to intervene in the long end of the Gilt market to stem the freefall in Gilt prices since last Friday highlighted, the scheduled agenda of data and events is again likely to be very much a sideshow to very choppy, poor liquidity markets and associated flows. Nevertheless, there are a number of important data points, above all German and Spanish provisional CPI readings, the EC’s confidence surveys, and to a much lesser extent UK Consumer Credit & Mortgage Lending (given this data is for August, and does not capture the chaos of recent days, thus rendering the data largely irrelevant), while the US has weekly jobless claims and final Q2 GDP. It’s also quite a busy day for US corporate earnings, headlined by Nike, accompanied by current meme stock favourite Bed Bath and Beyond, auto retailer Carmax and chipmaker Micron Technology; while the govt bond auction schedule has the end of month 5- & 10-yr Italian BTP sale and 30-yr from Canada. The volume of central bank speakers today is nigh on without precedent outside of international gatherings (e.g. IMF/World Bank meetings), but barring an unlikely volte-face on policy tightening, most of this is likely to be ‘more of the same’ hawkishness, but a close eye now needs to be kept on Financial Conditions indices, which in the US is now above the end 2018 Fed pivot point peak. 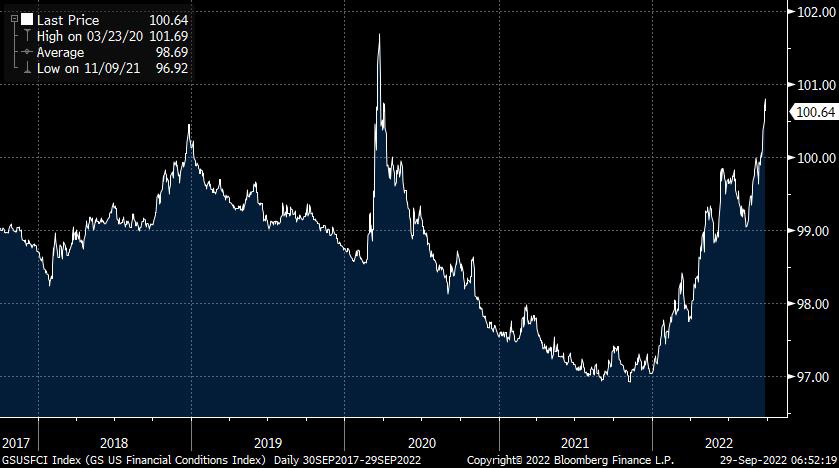 Hawkishness will be on display from central banks in Colombia and Mexico, who are respectively seen hiking rates 150 bps to 10.5% and 75 bps to 9.25%, and more than likely to keep the door open to further tightening. By contrast Czechia’s CNB is expected to keep rates on hold again at 7.0% . As for the BoE’s intervention in the long end of the Gilt market yesterday, as much as it clearly conflicts with hiking Base Rate, and also forced a delay to the start of active QT Gilt sales, there was simply no way that it could stand by and not draw a line in the sand at 5.0% for the 30-yr yield, above all with so much evidence of distressed sales from pension and other funds. But it is now being forced into measures to quell the disquiet about fiscal policy, and per se, start to look like little more than the Treasury’s poodle. Per se this intervention may prove to be little more than a passing respite, and next week’s Tory party conference could be a further watershed for the GBP and UK asset prices.

Spain’s CPI is expected to ease modestly in y/y terms, but both HICP and CPI are expected to remain in double digits (10.0% and 10.1%), and core CPI is forecast to rise to 6.6% y/y underlining the extent of second round effects. But it is German CPI which requires most attention, with HICP seen up 1.2% m/m to take the y/y up to 10.2% from 8.8%, heavily boosted by the ending of the EUR 9.0 public transport pass scheme, even if falling petrol prices should provide a considerable offset (as the consensus forecast assumes). The initial state reading from NRW at 1.8% m/m imparts some modest upside risks relative to a consensus estimate of 1.5% m/m. This in turn is expected to be the key driver of a forecast of 0.9% m/m for tomorrow’s Eurozone CPI to take the y/y rate up to 9.9% from 9.1%, with Core seen rising 0.4 ppts in y/y terms to a new record of 4.7%, again underlining that second round effects are getting traction, above all in Services. The EC’s confidence survey indices are all expected to fall, echoing the already reported fresh record low for Consumer Confidence, the latter boding poorly for Euro area Unemployment, which it typically tends to lead by about 6 months, with today’s German Unemployment data expected to see another rise of 20K, following on from +28K in August.

To view the full report and to sign up for daily market commentary please email admisi@admisi.com

The information within this publication has been compiled for general purposes only. Although every attempt has been made to ensure the accuracy of the information, ADM Investor Services International Limited (ADMISI) assumes no responsibility for any errors or omissions and will not update it. The views in this publication reflect solely those of the authors and not necessarily those of ADMISI or its affiliated institutions. This publication and information herein should not be considered investment advice nor an offer to sell or an invitation to invest in any products mentioned by ADMISI.