Overnight global equity markets were higher with the exceptions the markets in Germany, France, and Spain. Equities look to start the Wednesday trade in a positive track following positive Deere & Company earnings. However, from a longer-term perspective it should be noted that Deere & Company seemingly managed the stronger profit result from boosting prices to its customers. While the initial bias is up early, scheduled data from claims and durable goods could telegraph the focus of the markets in the coming weeks. In other words, seeing equities rally on soft data could confirm the focus of the trade remains on rates and not growth. On the other hand, seeing equities rally off better than expected data could signal the market has finally accepted the higher rate regime! Earnings announcements will include Deere & Company before the Wall Street opening.

S&P 500: As indicated already, the bias in the market is up to start especially with the S&P in the early going posting a 6-day high. The S&P should draft modest and temporary support from favorable Deere & Company earnings and might benefit if US durable goods show a modest gain as expected. However, we see fortunes shifting in favor of the bears in the afternoon as the market parses the FOMC meeting minutes. In the end, the Fed in the last meeting likely remained in an aggressive inflation fighting posture and that could cap the morning rally in the S&P at 4050.

NASDAQ continues to lag the rest of the market and we attribute that to the ongoing debacle involving crypto currencies and from fears of Apple phone shortages in the holiday season due to Covid issues in China. Furthermore, the tech sector is undermined this morning following news that HP planned to reduce its workforce by 12%. Close in resistance for the NASDAQ is 11,843 and a midday reversal could throw prices back down to 11,500. 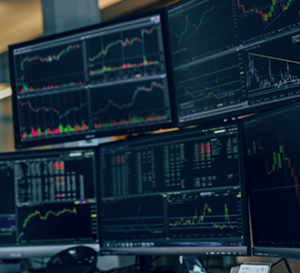 DOLLAR: Technically the dollar damaged its charts this morning with a 3-day low slide. Surprisingly, expectations for hawkish information from the Fed’s last meeting are not providing the dollar with significant support today, but traders should wait for the release of the meeting notes before deciding on their near-term trend views. However, it is possible that the trade is already looking ahead and is accepting of very hawkish talk from the Fed, and it is also possible that the trade thinks the Fed is getting the upper hand on inflation.

EURO: The ECB continues to trumpet the likelihood of a 50-basis point rate hike ahead and that combined with deteriorating bullish sentiment toward the dollar has given the euro a positive start today. Adding to the bullish track in the euro this morning is a near sweep of positive data overnight from S&P global manufacturing PMI data. In fact, except for France, Germany, euro zone and GBP composite and services PMI data were better than expected.

YEN: With Chinese daily infections nearing 30,000, a lack of respect for the Japanese economy and almost no capacity to hike Japanese interest rates, the path of least resistance is down in the Yen. In fact, if the dollar comes back into vogue after the FOMC meeting minutes release a quick slide to 70.00 is possible.

SWISS: From a technical perspective, the Swiss has built a modest consolidation support formation around the 1.05 level, with very critical support today pegged at 1.0475. Adding to the potential respect of the 1.05 level is the market’s technical balance after the slide of the prior 6 trading sessions.

POUND: The charts in the Pound clearly favor the bull camp with a pattern of higher lows and higher highs extending this morning. Furthermore, GBP S&P global composite, manufacturing, and services PMI data for November were all better than expected! As indicated recently, we see the Pound as the most likely primary benefactor of dollar’s weakness especially with the charts definitively bullish and the UK economy holding up better than was feared over the last 2 months.

In retrospect, the magnitude of gains in bond and note prices over the last 5 trading sessions appears to be undersized relative to the amount of bullish fundamental news flowing in the marketplace. However, as indicated earlier this week, the treasury markets continue to face a conundrum of opposing short-term and intermediate term fundamentals. Another limiting force in the market is the “global environment” of rising interest rates, with the ECB poised to raise rates 50-basis points and the central bank of New Zealand boosting rates by 75-basis points last night. In retrospect, yesterday’s 7 year note auction demand was very poor and could be a sign that longer-term investors are not interested in yields at the lowest levels since the end of September. Nonetheless, the near-term bias favors the bull camp with markets continuing to toss around recession and deflation views and data at best mixed. A potential major bullish force hangs in the wings in the form of a possible US rail workers strike.

In today’s action US scheduled data is once again expected to be offsetting, with claims ticking higher and durable goods readings slightly positive. However, subsequent data from composite, manufacturing, and services PMI readings and new home sales is likely to shift the pendulum in favor of the bull camp ahead of the release of the Fed meeting minutes at 1 PM. At this hour, trade chatter centers on the prospect of broad consensus for raising the ultimate upside target for US interest rates.