The Ghost in the Machine – Sugar Treat 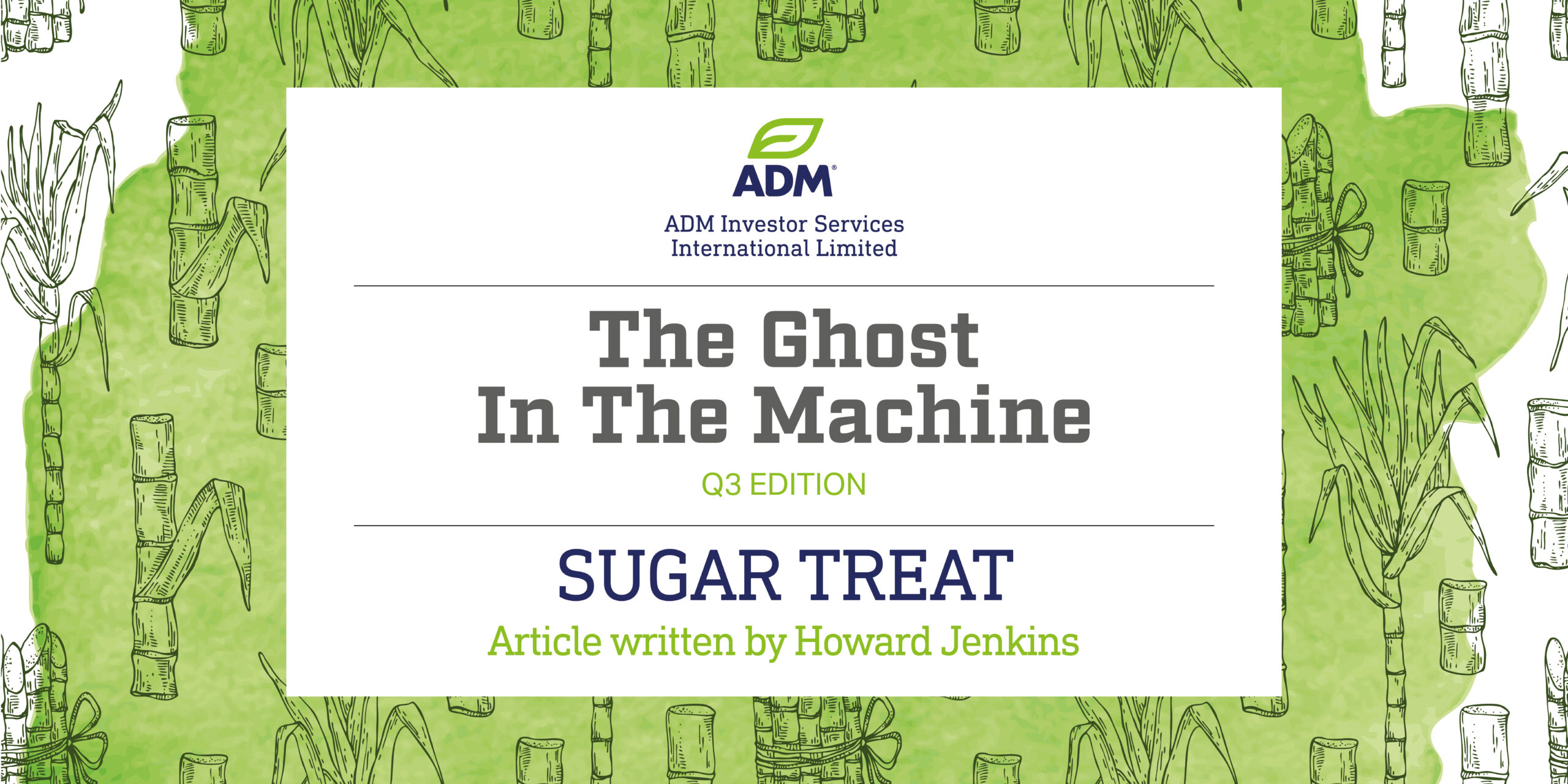 Every two years in October the good and great of the sugar industry meet for the London Sugar dinner held at the iconic Guildhall in the heart of the City of London. In the days before the dinner, attendees enjoy drinks receptions held by brokers and trade houses and discuss the markets and the future. This year it would have been 10 years since our first ADMISI ‘Sugar Treat’ event which comprises of presentations and drinks. Sadly, the global Covid-19 pandemic has put pay to the dinner and our reception with both being cancelled. It has been a great disappointment as we were looking forward to showing off our new office which we moved into mid-September.

At past ADMISI Sugar Treat events, I dust off my crystal ball to look into the future trying to predict production, consumption and, of course prices. While there is no London Sugar dinner this year I thought it is an opportunity to do the same in this article.

Back in the middle of October 2018 sugar prices were higher than current levels. They had just started to improve from a 10 year low after a two-year decline from over 23 cents. Raws were trading at 13.40 and whites at 371.00 so the nearby white premium was valued around 75.00. However, elsewhere it was a different world. WTI was close to $70 per barrel and the Brazilian real was at around 3.75. The funds were around 48k lots short. The decline in prices had been triggered by massive global production in the 2017/18 season. The season was extraordinary in many ways. Unprecedented perfect weather for growing sugar cane and beet was seen right across the globe. Virtually all the world’s major producers; Brazil, India, Thailand, the EU and the United States, produced record amounts of sugar resulting in a massive surplus of over 10 million tonnes. However, the 2018/19 season saw a drop in global production as low prices began to bite despite another record Indian production. A global deficit of around 1 million tonnes was seen. However, stocks from the previous season weighed on prices which remained in a very narrow range.

Fast forward to the present day and the world is a very different place. The Covid-19 pandemic has caused unprecedented change. The world economy has been hit very hard. Stocks markets crashed, crude prices collapsed and commodity prices followed as the world went into lock-down. While the situation has improved from the dark days of March and April it is still a very uncertain world. Sugar has, of course, not been immune, hit by a double whammy of the unexpected increase in Brazilian production and a drop in global consumption. At the beginning of the year analysts were predicting a sizable global deficit in production for 2019/20. Price responded by rallying to their highest level in two years in February only to sink to a ten year low as the pandemic took hold. A deficit of just over 2 million tonnes is still predicted for the current season but analysts expected the 2020/19 season, which starts in October to move back to a global surplus.

Consumption is much harder to predict. Never easy in the first place but add in the pandemic impact and it becomes even more difficult. Most analyst see consumption having taken a hit because of the global lock-down. Therefore, total consumption has probably dropped this season for the first time in living memory year on year. The big question is whether it recovers next season. Despite the on-going pandemic consumption could start to creep back to levels seen before the pandemic as the world begins to live with the virus. However, a possible global economic recession could also impact on demand. The usual increase because of population growth will also help. But, it is a very uncertain situation especially as sugar consumption has been targeted as being unhealthy with sugar taxes being introduced across the world. The debate on whether it is necessary to get people to limit their intake of sugar and whether taxing sugar products has the desired effect on obesity levels will continue. The historic linear increase of 2% a year in consumption is unlikely to be resumed for the time being.

Therefore, for 2020/21 season global production is likely to rise and consumption static at best. This suggests a production surplus of 3-4 million tonnes. This means global stocks are likely to increase. India has struggled to export its surplus over the past three years and has had to resort to giving ‘incentives’ to farmers much to the anger of other major producers.

Assuming a meaningful surplus for next season prices are unlikely to improve considerable from their current levels. Indeed, they could slip lower but it would seem unlikely to see a collapse to the levels of April. A recent Reuters poll had 12 cents as the expected level by the end of the year.

All the above is based on the current fundamental and macro picture. In these exceptionally uncertain times much can change. The world economy is very fragile and no one knows the course the pandemic will take. Will the USD continue to weaken? A weather issue could change the fundamental picture. The ‘La Nina’ weather phenomenon has recently developed. Could that bring drought conditions to the CS regions of Brazil? Will the Indian monsoon end with flooding of the cane crop as happened last year?

Let us hope that by the time traders do congregate again in London for the 2022 dinner the world is back on its feet and sugar prices are much closer to 20 than 10 cents.

Read The Ghost in the Machine

US Dollar Remains Under Pressure