Conditions in Brazil will continue to be favorable; though, there will be some pockets of fieldwork delays.

A close monitoring of the distribution of rain in Argentina will still be warranted in the first week of the outlook due to some pockets of moisture stress. Rain will be lowest in an area from La pampa and western Buenos Aires up into Santa Fe and eastern Cordoba; though, if stress develops, it would most likely be in La Pampa and western Buenos Aires. Last evening’s GFS model showed no notable changes through next Monday for the rainfall distribution in the nation.

The slow start to the marketing year for U.S. corn exports had many industry participants doubting whether U.S. exporters could hit the record U.S. government prediction, especially after a massive string of sales to China at the end of January. But shipments have notably picked up in recent weeks, and the current and potential pace of exports could probably accommodate an even higher forecast than most were originally expecting. 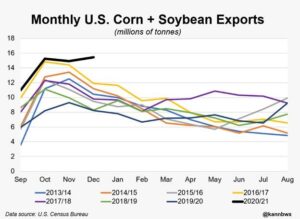 China’s corn prices will remain high in 2020/21, supported by strong demand from the livestock sector and rising import costs, the country’s agriculture ministry said. Anticipating a continued rise in prices of the grain, buyers are building up corn stockpiles as a recovery in pig production exceeds expectations and poultry flocks remain at high levels. Commercial corn stocks in some areas in China have hit multi-year highs as traders and feed producers built up inventories of the grain amid concerns over supply shortages. Meanwhile, increasing China imports and capital speculation have boosted international corn prices, which lent further support to the domestic market.

Drier weather in parts of Brazil’s Center-West allowed the 2020/2021 soybean harvest to gather momentum last week after disruptions caused by excessive rainfall, according to agribusiness consultancy AgRural. As of Feb. 4, Brazilian farmers had managed to double the area harvested to 4%, from 2% in the previous week. Yet harvesting is still way behind historical averages for this time of the season. Last year, farmers had reaped 16% of the cultivated area at around this time. Because of planting delays and the rains that have recently disrupted work in top grain states like Mato Grosso, the pace of harvesting is the slowest in 10 years

Argentina’s oilseed crushers have struck a deal with the government to hold down domestic edible oil prices in a potential salve to tensions after the country’s president threatened to increase food export taxes to contain inflation. The CIARA oilseed crushers chamber on Monday said the agreement on sunflower oil and sunflower-soy oil mix would help ease government concerns about inflation, which a central bank poll recently forecast would be about 50% this year. The chamber, which represents crushers that drive the country’s huge processed soy export sector, said this could help avert higher export taxes on their products, though farmers cautioned that taxes on other crops remained a threat. “In this way, the tightening of exports logs and export duty hikes are avoided,” CIARA said, citing commitments by the government to avoid distortion in the export market.

The Russian government on Monday approved a formula-based export tax system for wheat, corn and barley that is designed to help combat domestic food price inflation. The system will come into force on June 2. Russia’s Economy Minister said last week the country was accelerating plans to switch to a formula-based tax on wheat exports, as part of efforts to curb food price inflation during the COVID-19 pandemic. The switch to a formula, which will take place a month earlier than previously planned, will mean the tax will automatically rise in response to any increase in prices. The formula will be set at 70% of the difference between a base price for wheat per tonne and $200, the government said.

Russian wheat export prices fell sharply last week due to a weakening of the rouble and still limited demand on global markets. Russian wheat with 12.5% protein loading from Black Sea ports for supply in March was at $286 a tonne free on board (FOB) at the end of last week, down $7 from the previous week, the IKAR agriculture consultancy said. Sovecon, another Moscow consultancy, said wheat prices fell by $10 to $285, while barley rose by $1 to $248.

European Union soybean imports in the 2020/21 season that started last July had reached 8.95 million tonnes by Feb. 7, data published by the European Commission. That compared with 8.47 million tonnes cleared by the same week last season

France’s farm ministry on Tuesday raised its estimate of the country’s 2021 winter soft wheat area to 4.86 million hectares (mln ha) from 4.73 mln ha in its initial outlook in December. This would now be up 15.2% from the 2020 area, it said in a crop report.

European wheat prices rose on Monday as U.S. and European grain belts were hit by freezing temperatures while Russia’s new wheat export tax also continued to underpin prices. Benchmark March milling wheat was up 1.75 euros or 0.6% at 226.25 euros ($272.52) a tonne.

Indian farmers have drawn up plans to continue their protests during the harvest season from March by bringing reinforcements from thousands of villages, a top union official said. We have worked out detailed plans to ensure that our movement does not lose steam even during the next harvest season when farmers will gather their wheat and other winter crops. Tens of thousands of angry farmers have encircled the capital New Delhi to put pressure on the government to repeal three agricultural laws introduced in September. The government says the new laws will open up fresh opportunities to farmers by allowing them to directly sell produce to private buyers like large retailers. Protesters say the laws benefit large private buyers at the expense of growers.

India’s edible oil consumption is expected to contract for the second straight year in 2020/21 as a rally in vegetable oil prices to multi-year highs curbs retail buying;. Lower demand in India, the world’s biggest importer of vegetable oils, could limit a rally in benchmark Malaysian palm oil prices hich are trading near their highest level in a decade. Lower demand could also weigh on U.S. soyoil and sunflower oil.